Symptoms of Fault in the ABS System
The ABS system seems to have two common faults. The first is the ABS engaging when light braking is applied and the speed of the car is reduced from about 5 MPH down to a dead stop. There is a pulsating ABS brake and the car is very uneasy to stop.

The second symptom is the ABS light coming on shortly after the car is started, usually after turning the front wheel the first or second time. The ABS light in this case stays on (which indicates it is disabled).

How to Fix
The first symptom is a dirty ABS sensor. Just pull the sensor out and clean it.

The second symptom is an open circuit in the ABS sensor wire. Either a entire new ABS sensor and connecting wire is required (about $250+ at the dealer for the part), or you can perform a simple electrical repair if you have a few skills and tools for less than $20.

Cleaning a Dirty ABS Sensor
If your car experiences the ABS kicking in at low speeds when slowing down, it is most likely a dirty ABS sensor. The ABS sensor measures the speed of the wheel by looking at a toothed ring on the axle via electro magnetic coupling. If the sensor gets dirty, it loses its resolution and the ABS computer gets confused.

To clean the ABS sensor, just loosen the lug nuts, jack the car up, remove the wheel and you can find the ABS sensor. On the front wheels it’s on the forward side of the hub.

Remove by pulling gently by hand, it’s just a slight press fit. Once removed, clean with brake cleaner and a clean rag or paper towel. Insert it back into the sensor location until it firmly stops. 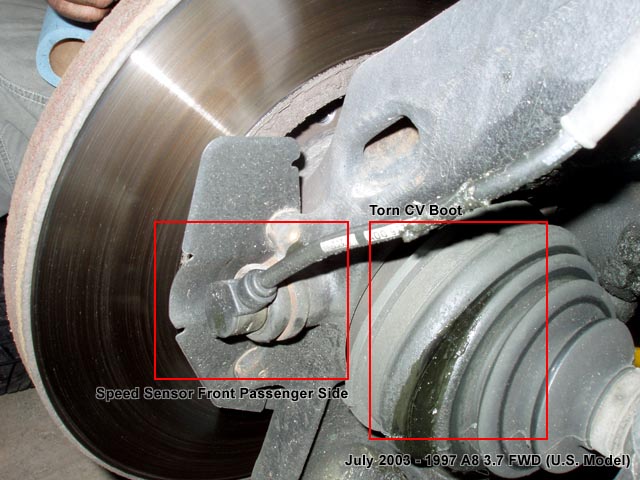 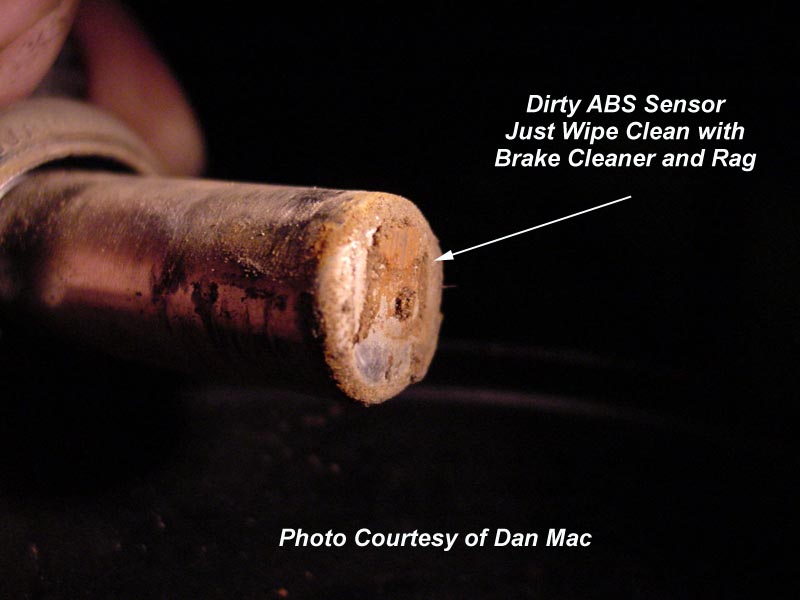 The rears are the same way, there is only one electrical connector going to the hub, that is the ABS sensor. Follow it and you’ll see the sensor.

This should stop the ABS from activating when slowing to a stop.

Repairing an Open Circuit in the ABS Sensor
If your car has the ABS light trip shortly after getting into the car and starting it, especially after turning the wheel a few times, it is most likely an intermittent open circuit in the ABS wire.

This open circuit is between the frame of the car and the wheel hub, where the wire gets stressed over and over. The wiring cracks inside and when the wheel is turned, the circuit is open circuited, and the ABS system disables itself (tripping the ABS light).

The easiest way to figure out which side it is on is with VAG-COM. Start the car, trip the ABS light by turning the wheel side to side, then pull the fault code. It will stated something of the sort «Right front ABS sensor, open or short to plus». Or it will say left front, either way, you will know which side is your problem.

If you don’t have VAG-COM, just remove one wheel and try moving the wire around. If it trips, you know you have the correct side. If it doesn’t, go to the other side and see if you can get it to trip.

Take that wheel off, and remove the wire from strut and frame mount to reduce stress on it. Start the car and hopefully the ABS light will be off. Then move the wire around and make sure it trips the ABS light. This will verify that you have the correct side and location. 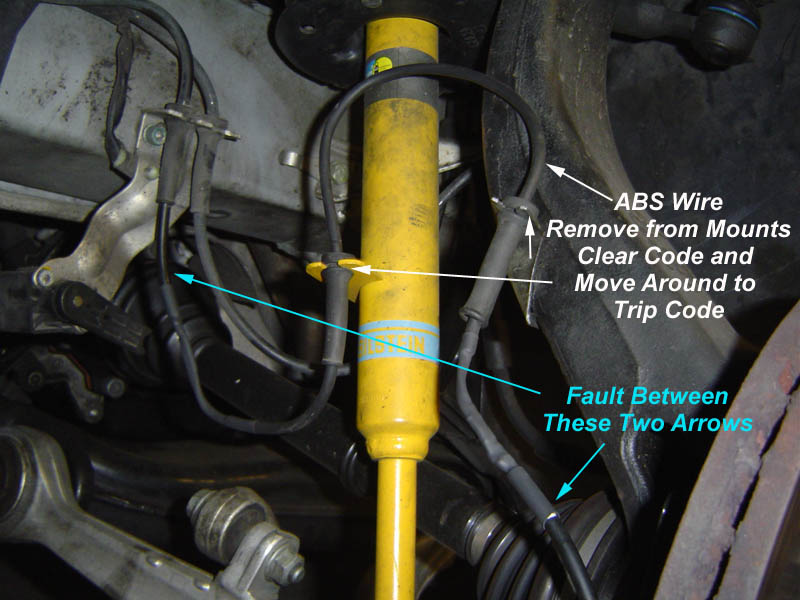 Now that the fault has been located, you’ll need:

I ended up using some two conductor wire already in a protective sheath. This was left over from a hands free car kit. Any two STRANDED conductors would do (do NOT use single conductor) . The following is the way I did the repair, it could be done multiple other ways including using crimped connections. Do what is best for you.

Step 1
Cut the wire roughly where shown in the picture above (between light blue arrows). This is the area where the fault is and must be replaced. CAREFULLY strip back the wiring insulation on both the ABS sensor and the body wiring harness side. Don’t cut the conductors inside the wire, just strip back the outside insulation.

Place the strut mounts (rubber pieces that fit on the frame and the strut) on the new conductor before you start. 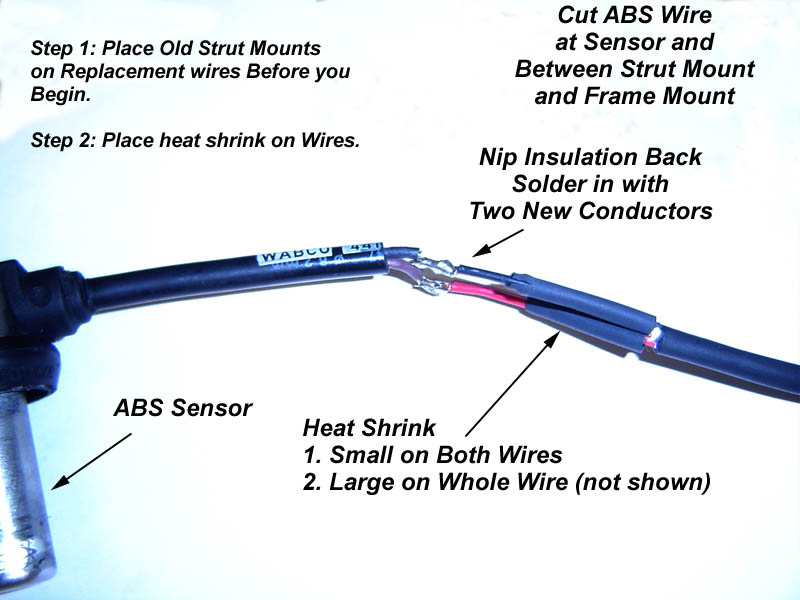 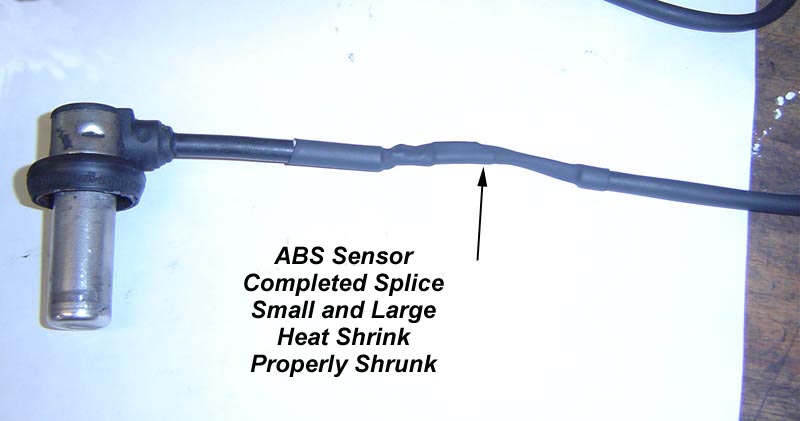 Step 3
Repeat the same process on the frame/car side of the wire. Be patient and do it correctly.

Reinstall the wire into the mounts. Start car and verify the fault has cleared. It’s that simple!