No matter where you live if your Chevy Aveo’s AC compressor is not turning on, it can turn a pleasant commute into a nightmare (particularly if you have kids that are riding with you).

The AC compressor pulley is always being turned by either the serpentine belt or a dedicated belt (it’s going to depend on the model year and engine type). It uses a clutch to grab the pulley and cycle coolant through your Aveo’s AC system.

If this clutch doesn’t grab, the AC compressor will not turn on.

Before opening the hood to see if there is anything wrong with the AC compressor, start the Aveo and turn the AC off and back on a few times. Do it somewhere quiet.

If you hear a “thunk” or “clunk” noise after turning the AC on, the compressor is engaging. Something else is the problem. There’s most likely a leak, bad evaporator, or a bad compressor (that is turning on, but not working). If that’s the case, jump to this article: Chevy Aveo AC Not Blowing Cold.

Here’s how to about diagnosing why your AC is not turning on in your Chevy Aveo: 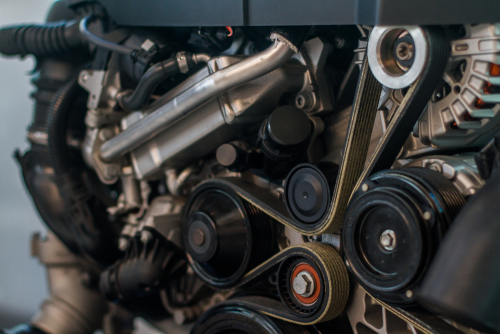 As stated above, your Aveo’s AC compressor may be turned by the serpentine belt that turns all of the engine accessories. Or, it may be turned by an independent belt. If there are two belts, they’ll both be attached at the crank pulley.

Inspect the belt to see if it is cracked or shiny. It may just be that the belt can’t turn the compressor anymore. It could even be missing entirely without you noticing if it is an independent belt.

After inspecting the belt, there can only be two things left that could be happening:

1. The clutch is not getting a signal to turn on. This indicates some form of wiring problem.

2. The AC compressor is getting a command to turn on but is no longer able to, which would indicate that it needs replacing.

2. Turn the Compressor by Hand

Your Aveo’s AC compressor should freely turn by hand when it is not engaged. Obviously, you’d want to do this with the vehicle off. It’ll often be located by electric fans. Even with the key off, treat them like they can still come on.

You don’t want to turn the pulley where it is attached to the belt. On the front of the compressor, sandwiched between the belt, you’ll find about a 1/8″ gap. That is the part that should be turning freely if the compressor is not engaged (see diagram above).

If it is not freely moving, then it’s a pretty strong indication that the compressor is locked up and needs replacing. On the other hand, if it is turning freely, we need to determine why it’s not activating.

Being that the clutch compressor is just a few feet off of the road, it can accrue wiring damage over the years.

Inspect the harness to make sure that it doesn’t have any opens or shorts. If it looks good, it’s time to move on to testing the relay and seeing if you can manually get the compressor to turn on.

The power going to the AC compressor relay is going to be fused, so check that fuse while you’re at it as well. You can do this in under 2 minutes with a test light.

You can use a jump wire to determine if your Chevy Aveo’s AC compressor clutch is activating properly. But, first, you’ll need to locate the compressor relay.

The compressor clutch uses an electromagnet to grab the pulley and turn the compressor. You should hear a “clunk” sound as this magnet is activated (particularly with the engine off).

You’ll need a jump wire. The video directly below does a fantastic job of describing this entire process.

Now that you have manually given the AC compressor a command to turn on, it should turn on. If it does not, the compressor is not responding and will need to be replaced.