Probably more than you’ll ever want to know.

Background: While trying to close/stow the 3rd row seats in my Chevrolet Tahoe recently, the 1st release lever, that folds the upper half of the seat down on itself, was stuck. I tried both pushing and pulling the upper half of the seat at the same time while trying to lift the lever (which normally works). It wouldn’t budge, so I became frustrated and forced the lever. I heard and felt a pop and the lever moved and went through its complete travel, but the seat didn’t fold. After close inspection, I realized that the part of the seat near the lever would move very slightly forward when I lifted up the lever but the other side of the seat didn’t move at all. I figured, correctly as it turns out, that the hinge directly connected to the lever was releasing but the other one connected by a cable was not. I assumed the cable had slipped or broken in some way.

Problem: The main issue was that the seat was stuck open, basically eliminating 50% my cargo space. Without being able to close the seat, both the seat lift and release levers didn’t work at all, which meant the seat couldn’t even be removed in its current condition to troubleshoot/repair.

Solution:
Phase 1: Removing the 3rd row seat
Thankfully, I found the exact video I needed on YouTube for how to remove the 3rd row seat when it wasn’t releasing. It involves opening up the leather/cloth seat cover, the plastic cover and exposing the hinge mechanism and manually releasing it.

Phase 2: Fixing the seat
Now that the seat is out of the vehicle, you can troubleshoot what’s wrong with the release. In my case (yours may be different) the problem and fix were surprisingly simple. Unfortunately, getting to the point where the cables are exposed is difficult because of how the plastic pieces on the base of the seat are joined together. I found putting pressure on the joint while pulling the pieces apart was the most effective method, and resulted in only one set of plastic clips breaking. Once the plastic is off the cables are exposed. 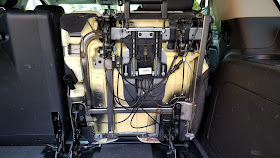 Along the cable that connects the lever to the hinge release pin, there is a plastic cylinder. From what I can tell, this plastic cylinder acts as an expansion joint to allow the cable jacket to be shortened for installation/removal of the cable. The clip in the middle of the cylinder acts as a lock to keep the cable in the long condition. In my case, the clip had released and the cable jacket was in the short condition, which meant it wasn’t taught enough to release the hinge when I pulled on the lever. 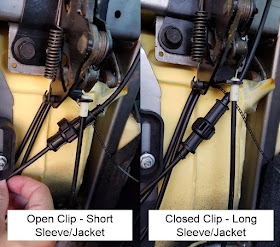 I simply pulled outward on the free floating end cable jacket next to the plastic cylinder (lengthening the jacket) and inserted the plastic clip to lock it and voila a working seat folding lever! The video below shows a before and after of this step and how it affects the function of the seat lever.

Seems like a silly fix for how much time I spent removing/troubleshooting/installing the seat, but it works again at no cost so I can’t complain too much. I’m guessing that the expansion joint also doubles as a weak point in the system to prevent the cable from being broken in the event too much force is put on the lever.

I couldn’t find any forum/blog posts with my exact problem/solution, so hopefully this helps someone with this issue in the future!