Your Nissan Patrol’s ABS Light comes on when it fails a self diagnostic cycle. When on, it indicates that the Patrol does not have Anti-Lock brakes, and the safety they provide.

Your Patrol’s ABS system uses a system of sensors to determine wheel speed when braking. If one of the wheels is starting to lock up, it’ll apply the maximum amount of brake to that wheel in order to keep it from sliding.

Wheels that are turning will slow a vehicle faster than a locked wheel. Skidding tires also create flat spots in the tire, which can be inconvenient and dangerous in itself. ABS also allows you to be able to steer the vehicle while slowing down, and has been around for so long that many drivers have never driven a vehicle without it.

Is it Safe to Drive Your Patrol?

The ABS light is different than the brake warning light itself. The brake light indicates that there is a problem with the physical braking system and that your Patrol is unsafe to drive.

Yes, you can drive your Patrol with the ABS light on. Is it safe? It’s not as safe, especially when it’s raining, snowing, or the road surface is loose/uneven. That’s why we recommend having the ABS system fixed as soon as possible.

A good code scanner will often tell you which part of the ABS system has gone bad. Not every OBDII scanner will give up this information. A good one will. Most auto parts stores will have a free scanning service that they would be happy to let you utilize.

Here are the three most common causes of the ABS light coming on:

The wheel speed sensors are responsible for monitoring the wheel speed and sending it back to the computer system. If one of the wheels is moving slower than the others it on its way to locking up. The ABS then takes activates on that wheel in order to keep it from locking.

When this sensor is no longer sending a signal to your Patrol’s ABS system, it is no longer functioning properly and the ABS light will be activated on the dashboard.

The antilock brake system runs through the ABS module. This module physically controls the anti-lock brake system If it becomes damaged, and can no longer control all four brakes, the ABS light will activate. Typically, corrosion is the most common reason why the module fails. 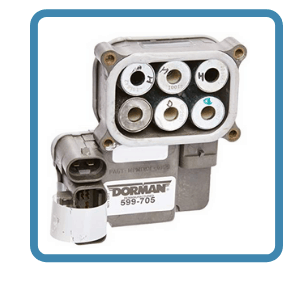 If the fluid level is too low to keep pressure in the ABS lines, the ABS light will come on. Without the pressure the ABS will no longer be able to physically activate.

It is not advisable to ignore your Nissan Patrol’s ABS light. Most of the time, the wheel speed sensors are going to be what triggers it. If there is anything you would like to add, please leave a comment below. Good luck!