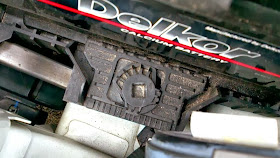 Today, the battery died. It was the original battery that came with the car and lasted 1 year 2 months which I think was no good because I had expected at least 1 year 6 months. Wifey had just gone round the first corner to the end of the road in front of our house and the car suddenly died. She gave it a few hard starts and eventually gave its last saving grace enough to send the car parked safely at home. Thus, I came from work early to help get a new battery but was confronted by problems I had never faced before. Removing the positive battery terminal was chicken feed though I needed a small spanner to unscrew a nut for the negative battery terminal. Firstly, I had never come across this type of battery lock as the usual type from in other cars could be unscrewed with a spanner. Removal of the battery required a racket, an extension tool and a small male plug to unlock the latch that kept it in place. I immediately went off to my local hardware retailer but he did not keep stock of that smaller male plug as the popular version was slightly larger. Then I got a call from wifey saying the Peugeot service mechanic was coming any moment. The battery got efficiently changed and cost RM472 (which I felt was expensive. I will check it later with a spare-part shop to see how much it retails outside) and service charge was RM94 so it totaled RM566.40. Secondly, I realized is that when the battery goes flat, one cannot open the boot. It is possible to retrieve things by unlocking the rear seats but don’t hope to change a tyre or get the tool kit. I usually keep the tools on top of the spare tyre. Now it looks like I have to keep them inside the car. I have to knock the head of the design team. I am sure the life expectancy of this battery can be extended by adding a separate power cable from the alternator to the battery terminal like I did for my KIA Spectra but this car has a 5 year warranty so I guess that is out of the question. 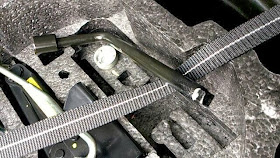 Thirdly, Peugeot 407 has a battery lock to keep it in place from moving but surprising doesn’t come with an accompanying key to unlock it and l have tried on vain to acquire an appropriate lug from more than 5 DIY shops. Can you imagine if the car broke down along the highway due to a faulty battery? The driver doesn’t have an appropriate tool to take the battery out to replace it and the unwanted service of a toll truck may prove necessary. So today, I went to see a local car accessory shop mechanic who suggested rather than customize a specific tool, would modify the tip of the wheel’s bolt remover (forgot what it’s called), have sit shaved down to function as the key. A spray of black paint over the shaven portion bought it back to look as new as original. This was agreed and a test revealed it functions very well. Service charge: RM10

2020: After 9 years, the third battery needed a replacement (That charging cable I did really serves its purpose well) but I had to call a mechanic to swap a temporary battery because firstly, it was impossible to unlock the boot from inside (I don’t know how my salesman succeeded to do that right before my eyes) but from now on I left the tyre bolt remover in the boot’s side compartment, retrievable from inside.