How to Fix a Car Radio That Won’t Turn Off

Get your radio working again

Jump to a Section

When your car radio won’t turn off, you can end up dealing with some pretty annoying consequences. Car radios don’t draw a whole lot of power, but it’s enough to drain your battery dead overnight, or even over the span of a few hours if your battery is already on its last legs. So how do you fix a car radio that won’t turn off? It’s usually due to some type of electrical problem, so we’ll walk you through the most common causes and how to fix them.

What Causes a Car Radio to Stay on All the Time?

There are a few common problems that can result in a car radio not shutting down when you expect it to, and each one applies to a fairly specific situation. The most common cause of this problem is an improperly wired head unit, so if you have an aftermarket radio, that’s the first place to look. 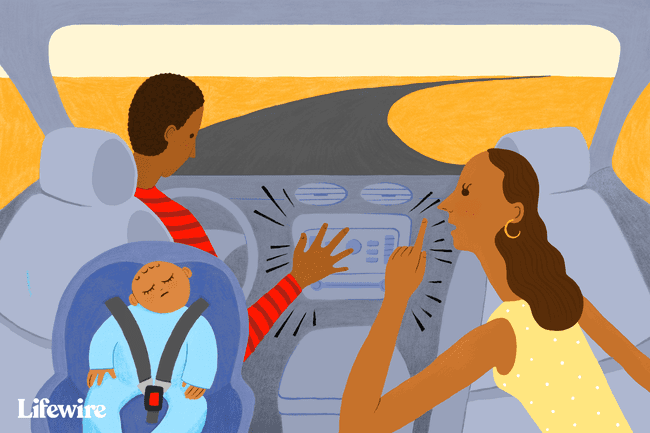 Other than that, you could have a problem with your ignition switch, or some other related component, and there are also some cars that are designed to allow the radio to stay on for a given amount of time, usually about ten minutes, unless a door is opened first.

Here are the most common problems that will prevent a car radio from turning off:

How to Fix a Car Radio That Won’t Turn Off

Check your head unit wiring. If you have an aftermarket head unit, and your problem has existed ever since it was installed, then you’re probably dealing with a wiring problem.

Car radios are designed to have a single ground wire and two power wires. One power wire is hot all the time, and the other only has power when the engine is running, or when the ignition switch is in the accessory position.

If the main power wire for your head unit is connected to a power source that is always hot, the radio won’t ever turn off.

You can check for this problem with a voltmeter or test light. If both power wires are hot all the time, you’ll need to rewire the radio to receive power from a source that is only hot when the ignition is in the accessory or run position.

Check your ignition switch. Some ignition switch problems can result in accessory power being available even when the key is removed. If you found that both of your power wires were hot in step one, but you couldn’t find a power source that was only hot with the ignition switch in the accessory or run position, this might be your problem.

To fix this problem, you’ll need to make sure that the ignition switch is actually in the off position when you remove the key. That should allow the radio to turn off. In the long term, replacing the worn out cylinder will fix the problem.

Check if your radio is designed to stay on for a set amount of time. Some car radios are on a timer, so they are designed to not shut off immediately.

In this case, you’ll want to turn off your engine, remove the key, leave the vehicle, and shut the door. After a few minutes have passed, check if the radio has turned off.

If the radio turns off after a few minutes, that’s normal for your vehicle.

If it still hasn’t turned off, check if the dome lights turn off when the doors are shut. If the dome lights don’t turn off, you might have a bad door switch. Otherwise, this type of problem usually requires help from a professional.

How to Make Sure Your Car Radio Is Wired Correctly

The basics of car stereo wiring aren’t terribly complicated, but it is pretty easy to get it wrong if you’re missing some vital information or don’t take a methodical approach to the job. The crux of the problem, as it relates to this issue, is that every car radio requires a ground and then two or three connections to battery positive.

One connection is “always on,” and it’s used for the memory keep-alive function. The other, which actually provides power to run the head unit, is switched so that it’s only hot when the ignition is in the accessory or run position.

If a head unit is wired wrong, so that the “always on” wire is connected where the switched wire should be connected, the radio won’t ever shut off. It will always have power, so it will continue to draw down on the battery even after you shut the engine off and remove the keys.

Depending on the shape that the battery is in, this drain can absolutely result in a dead battery, a jump start, and possibly even a broken radio.

In broad strokes, you will want to check the power wires that are connected to the head unit and determine which one is switched. One wire should be hot all the time, and the other should only show 12 volts when the ignition switch is turned on. If these wires are reversed, or the “always on” wire is connected to both, then connecting them correctly should fix the problem.

How an Ignition Switch Prevents a Radio From Turning Off

Some cars come with a feature that allows the radio to stay on after the keys have been removed from the ignition. This feature typically shuts the radio off after about ten minutes or if a door is shut, although that isn’t a universal rule.

If you drive a car that was built in the last 10 or 15 years, you’re experiencing this problem, and you have an OEM head unit, you may want to start by checking your owner’s manual to see if your vehicle does have this feature.

If you do have a problem that’s related to a radio shut-off delay feature, then both the diagnosis and fix are probably going to be outside the realm of an easy DIY job. If you notice that opening and closing your doors ​don’t activate your dome light, then you may be dealing with a faulty door switch, which is typically pretty easy to replace.

In other cases, you may have a problem with a relay or other component. You can attempt to test or replace your accessory relay, for instance, but depending on your vehicle and what problem you’re actually dealing with, that may or may not fix the problem.

To fix car audio static, add a car antenna to boost reception if the problem is external. Otherwise, try: checking the head unit’s ground connection, unplugging the radio antenna, and rerouting the antenna cable. If the head unit is faulty, you may need to install a power line noise filter.

To improve your car radio reception, ensure your manual antenna mast is fully extended, and see if your antenna cables are properly seated in your head unit. You may need to install a signal booster or get a new head unit if your reception remains poor.