Always wear your seat belt when travelling in your vehicle. You must also comply with the legislation of the particular country you are in.

Incorrectly adjusted or twisted seat belts may cause injuries in the event of an accident.

Use one seat belt per person, whether child or adult.

Even pregnant women should wear a seat belt. In this case, ensure that the lap belt is not exerting too much pressure on the abdomen, but do not allow any slack.

Before starting, first adjust your driving position, then ask all occupants to adjust their seat belts to ensure optimum protection.

— Sit well back in your seat (having first removed your coat or jacket). This is essential to ensure your back is positioned correctly;

— adjust the distance between the seat and the pedals. Your seat should be as far back as possible while still allowing you to depress the clutch pedal fully. The seatback should be adjusted so that your arms are slightly bent when you hold the steering wheel;

— adjust the position of your headrest. For the maximum safety, your head must be as close as possible to the headrest;

— adjust the height of the seat. This adjustment allows you to select the seat position which offers you the best possible view;

— adjust the position of the steering wheel. 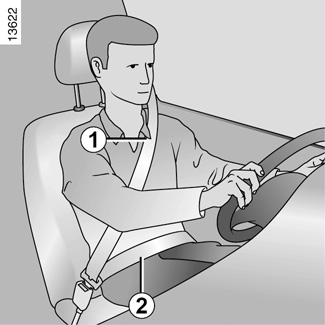 Sit with your back firmly against the seatback.

Shoulder strap 1 should be as close as possible to the base of the neck but not on it.

Lap belt 2 should be worn flat over the thighs and against the pelvis.

The belt should be worn so that it is as close as possible to your body, i.e.: avoid wearing heavy clothing or keeping bulky objects under the belts, etc. 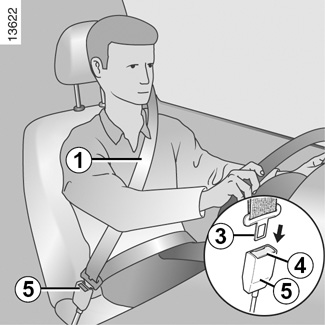 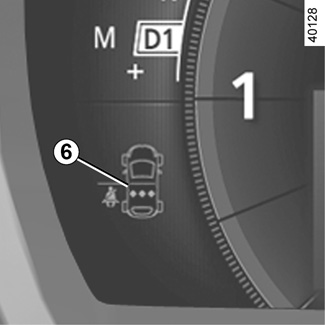 Unwind the belt slowly and smoothly and ensure that buckle 3 locks into catch 5 (check that it is locked by pulling on buckle 3 ).

If the belt jams, allow it to return slightly before attempting to unwind it again.

If your seat belt is completely jammed, pull slowly, but firmly, so that just over 3 cm unwinds. Allow it to return slightly before attempting to unwind it again.

If there is still a problem, contact an approved dealer.

This lights up on the central display when starting the engine then, if the driver’s or front passenger’s seat belt (if this seat is occupied) is not fastened and the vehicle has reached approximately 12 mph (20 km/h), it flashes and a bleep sounds for around 120 seconds.

Note: an object placed on the passenger seat base may activate the warning light in some cases.

Warning light ß lights up on the central display, accompanied by the graphic 6 on the instrument panel for approximately 30 seconds each time the vehicle is started, a door is opened or a rear seat belt is fastened or unfastened.

Press button 4 and the seat belt will be rewound by the inertia reel. Guide the belt. 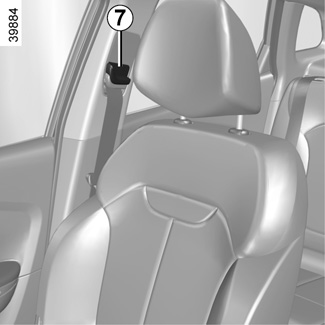 Adjusting the height of the front seat belts 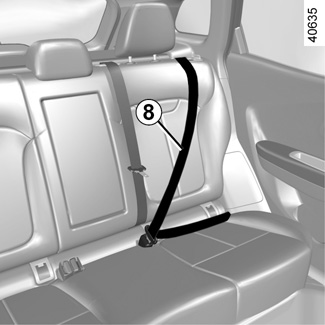 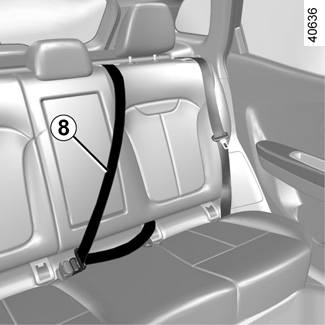 The belts are locked, unlocked and adjusted in the same way as the front belts.

Check that the rear seat belts are positioned and operating correctly each time the rear bench seat is moved.

The following information applies to the vehicle’s front and rear seat belts.

— No modification may be made to the component parts of the originally fitted restraint system: seat belts, seats and their mountings. For special operations (e.g. fitting child seats), contact an authorised dealer.

— Do not use devices which allow any slack in the belts (e.g. clothes pegs, clips, etc.): a seat belt which is worn too loosely may cause injury in the event of an accident.

— Never wear the shoulder strap under your arm or behind your back.

— Never use the same belt for more than one person and never hold a baby or child on your lap with your seat belt around them.

— The belt should never be twisted.

— Following an accident, have the seat belts checked and replaced if necessary. Always replace your seat belts as soon as they show any signs of wear.

— Make sure that the buckle is inserted into the appropriate catch.

— Ensure that no objects are placed in the area around the seat belt catch as they could prevent it from being properly secured.

— Make sure the seat belt catch is properly positioned (it should not be hidden away, crushed or flattened by people or objects).