If fitted on the vehicle, the tailgate locks and unlocks at the same time as the doors.

Depending on the vehicle, you have several different ways to manoeuvre the tailgate:

— using the controls on the tailgate;

The attaching of any carrying device (bike rack, luggage box, etc.) resting on the luggage compartment lid is prohibited. To install a carrying device on your vehicle, contact an Approved Dealer.

— In the event that the battery is discharged or if it is changed, the tailgate should be closed (manually if necessary) to restart the tailgate motor.

Ensure that nobody is close to the moving parts when opening/closing the tailgate.

Activating the automatic tailgate opening or closing using the dashboard control or using the RENAULT card causes three beeps to sound just before the tailgate begins to move.

When opening or closing the tailgate, ensure that nothing interferes with the manoeuvre.

To avoid damaging the tailgate system, do not manually force the tailgate to open or close while it is moving. 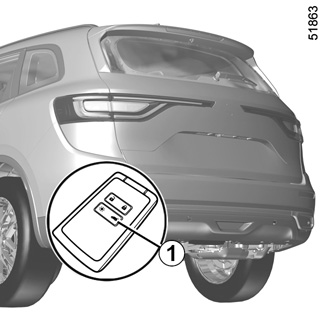 With the ignition off, press and hold switch 1 on the RENAULT card. 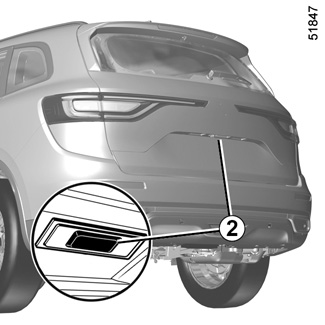 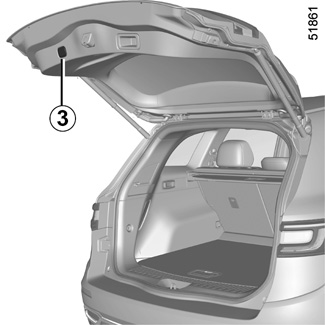 As a safety precaution, the doors should only be opened or closed when the vehicle is stationary. 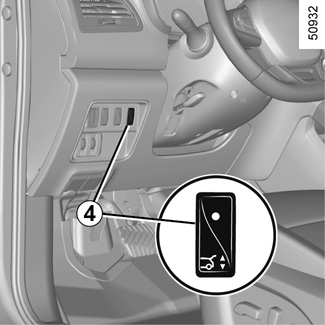 Depending on the vehicle, press and hold switch 4 .

The hands-free function grants access to the boot or allows it to be closed while you have your hands full.

With the RENAULT card on your person and with the ignition off, perform a forwards/backwards movement with your foot under the rear bumper.

The sensor detects the approach and removal of your foot and triggers the opening or closing of the tailgate. 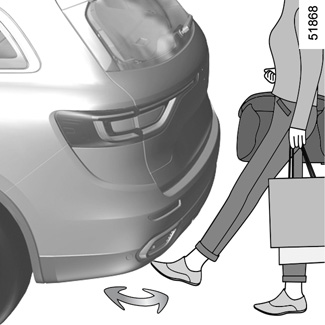 Do not keep your foot in the air. Carry out the movement without stopping.

Note: With the tailgate open, after detecting a closure control, it waits around 3 seconds before triggering the closure (a beep is emitted every second).

Activation/deactivation of the hands-free function

Using the multifunction screen, select menu “Vehicle”, “User settings” then “Use handsfree card: open/close”. Select “ON” or “OFF” to activate or deactivate the function.

Usage features of the hands-free function

— the hands-free function is no longer available after a few days of lack of movement of the vehicle, or after around 15 minutes if the vehicle is unlocked. To reactivate it, use the unlocking button on the RENAULT card.

— The “Hands-free” function is only available if the vehicle is stationary and the engine is switched off (and not on standby with the Stop and Start function).

— The «hands-free» feature may not work if the vehicle is equipped with a towbar or is in an area of high electromagnetic radiation.

The automatic tailgate manoeuvre can be stopped at any time by a short press on one of the controls. Depending on the opening position, the tailgate hatch can however continue to be opened manually.

If the tailgate is stationary in the intermediate position, your next press will move the tailgate in the opposite direction to when you stopped it.

After stopping the tailgate, you can perform the manoeuvre manually if you wish.

You can switch to automatic movement at any time by pressing one of the controls.

When the tailgate window encounters an obstacle (presence of an object or person) when it is moving, it stops. Depending on the opening position, the tailgate hatch can however continue to be opened manually.

Press the tailgate opening/closing control to reperform the tailgate movement in the same direction as before encountering the obstacle.

The obstacle detection is an aid to opening and closing the tailgate, it does not in any way replace the user’s care or responsibility.

You can adjust the maximum tailgate opening height It will always stop at the chosen position:

— open the tailgate to an intermediate position;

— manually adjust the tailgate to the chosen position;

— press the automatic tailgate control 3 for more than 3 seconds to save the position.

Two beeps will sound to notify you that the position has been saved.

Before opening/closing the tailgate, ensure that the surrounding space is sufficient to allow the tailgate to operate. If not, stop the tailgate movement with the external tailgate control and hold the tailgate in position by hand (the tailgate may continue to open manually).

If the tailgate is moving and the engine is started, the movement will stop for a seconds before continuing.

Make sure that the sensors are not obscured (by dirt, mud, snow, road salt etc.).

If you activate the automatic tailgate continuously for around a minute (sequence of opening and closing), it will stop in order to avoid overheating. The operation will return to normal after about a minute.

In very cold weather conditions, the automatic opening may not operate if the trunk lid joints are frozen.

Disable the «hands-free» function before washing the vehicle manually or handling the emergency spare wheel or the towbar.

Risk of accidental opening or closing of the tailgate which may cause injury.

Driver’s responsibility when parking or stopping the vehicle

Never leave your vehicle with a child, an adult who is not self-sufficient or a pet inside or at the rear of the tailgate, even for a short while.

They may pose a risk to themselves or to others by starting the engine, activating equipment such as the electric windows, the automatic tailgate or by locking the doors.