FRONT BUMPER REMOVAL HOW TO: with pictures

So, I tackled this this afternoon, and realized there were no write ups on how to do it, so i decided to make one, i hope this helps someone else out..

<And as mentioned in a comment. FYI: If you have a acc/emergency brake error it’s expensive to fix. Ok, now you can proceed>>

Tools needed: T25 torx bit **all bolts youll remove are T25**
Tools to help: plastic trim tool to help take of the VW logo, and a skinny/thin arm (must fit in opening behind VW by where the hood latches.) 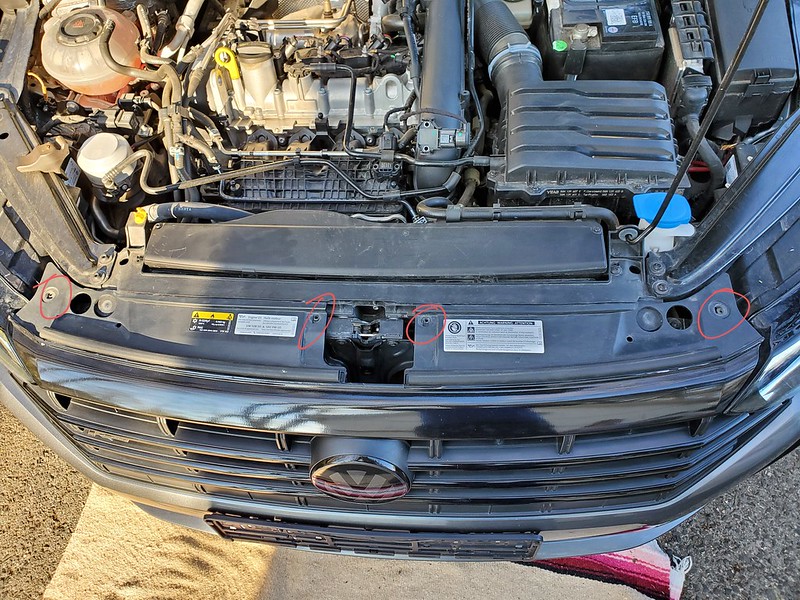 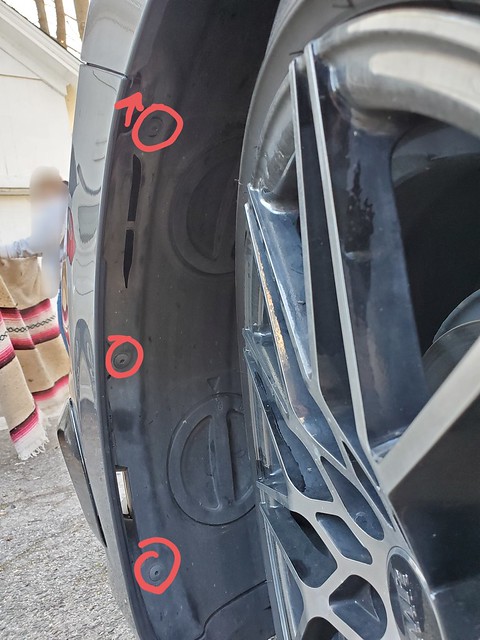 3 on the bottom of the bumper corner under the fog light area, on the plastic at the ground (circled) and theres one thats closer to the middle but still close by. (arrow showing what direction to look.) (BOTH SIDES of car) 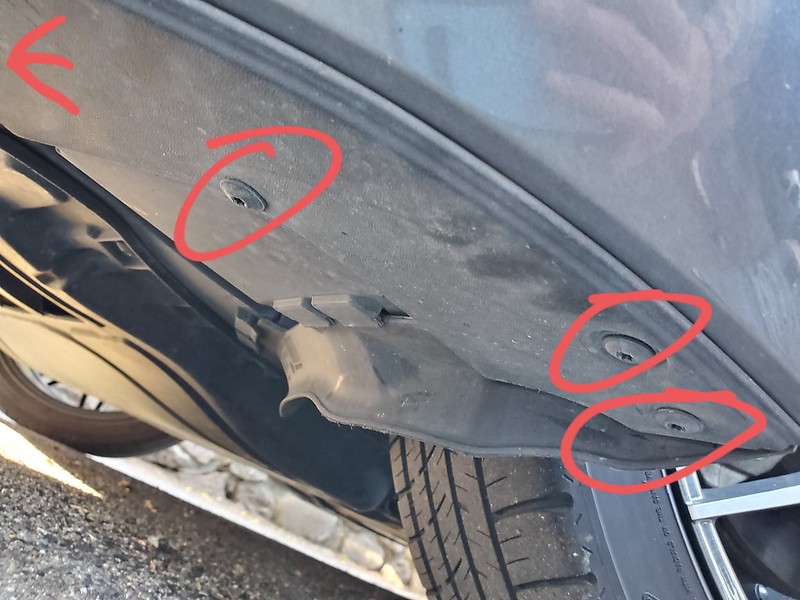 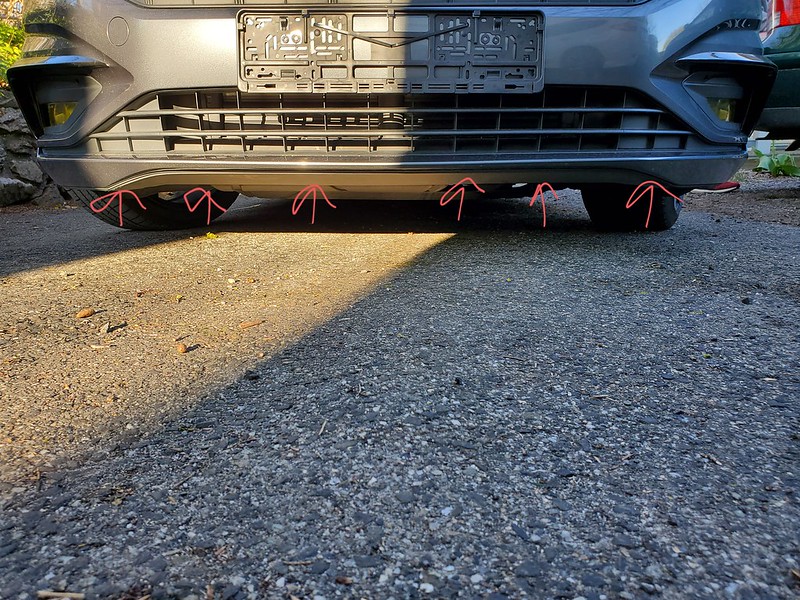 PULL out from the corner where the bumper meets the fender 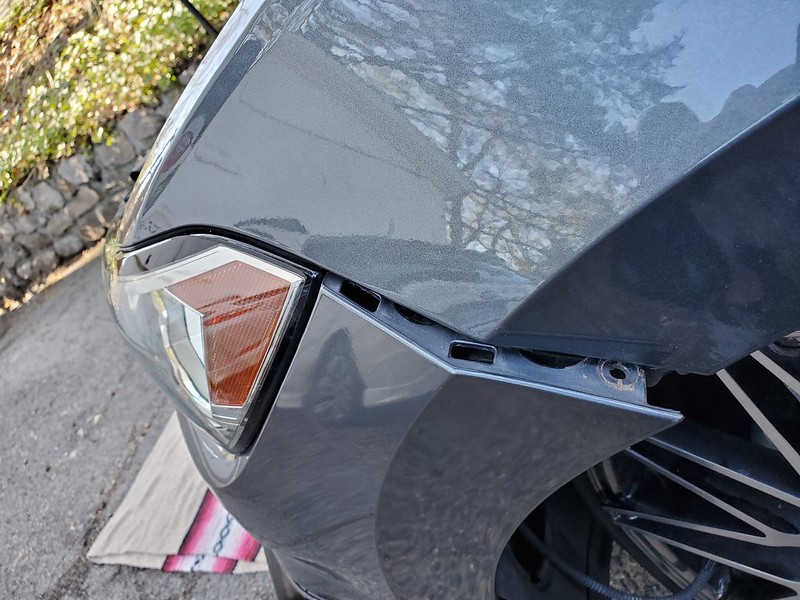 Next, youll have to use that thin arm I mentioned at the beginning to reach in by the latch for the hood and you can see the body colored paint part of the car bumper connected to the black plastic clips, pull up on the bumper to unlatch from the black plastic which is connected to the rest of the car. three clips on each side of the center latch(the two pictures shown below are where they are with the bumper removed.) These are difficult to reconnect afterwards and require a lot of pushing on the outside of the bumper and trying to pull them together. 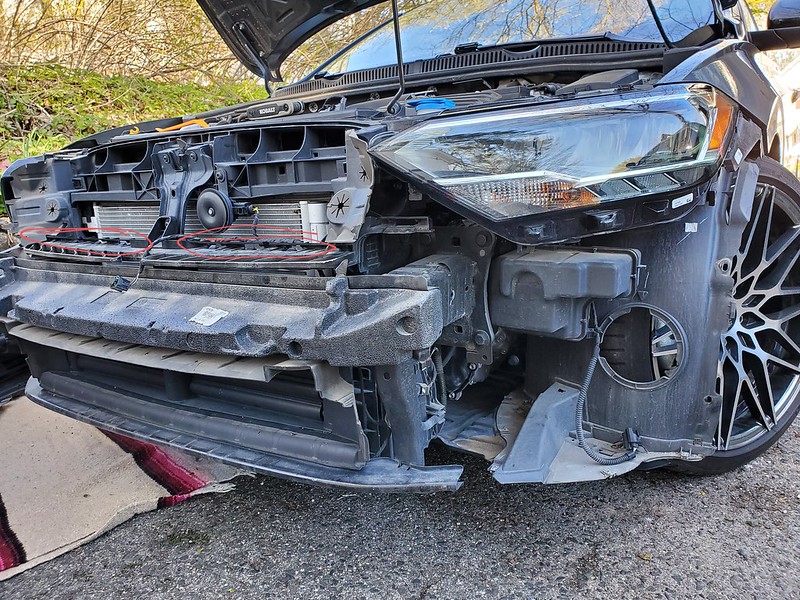 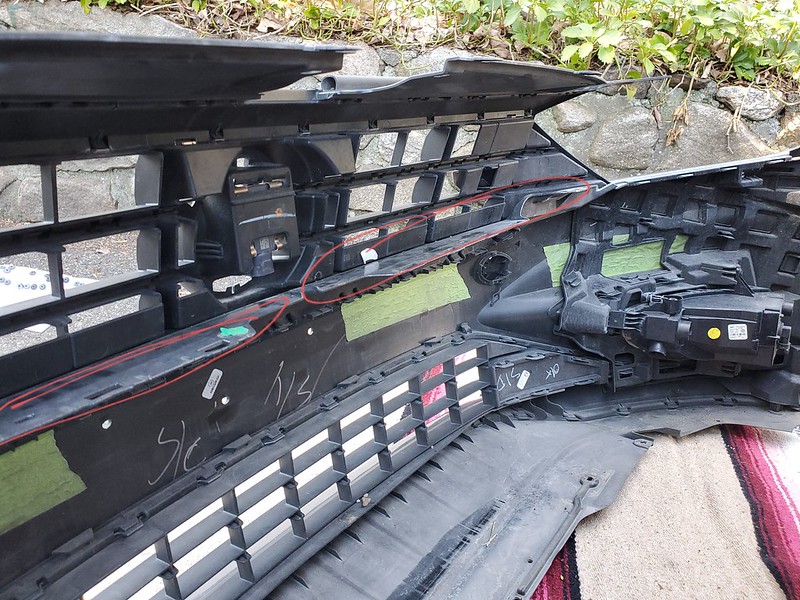 After that the bumper should be mostly free, you can start to pull off the car carefully..

To un-clip the sensor i found it best to remove the vw badge to help me disconnect the plug.
the badge has 3 clips on the top part (green & purple circles) that youll have to pry out from behind you should be able to push them to get a pry tool to hold it while you do the other side, and the bottom (red circles) is just tucked in and after the top 3 are undone the bottom is just tucked behind the plastic, just pull it up-ish. 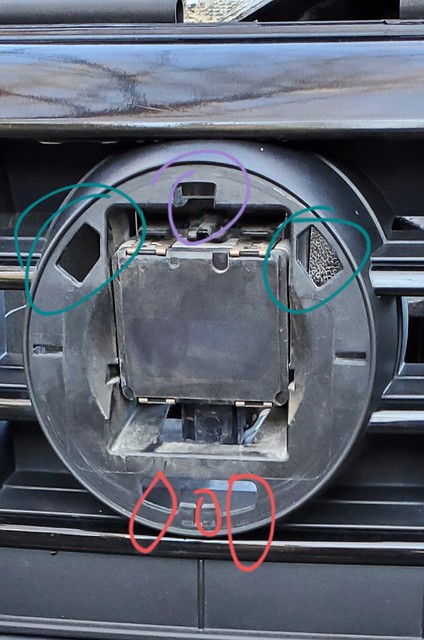 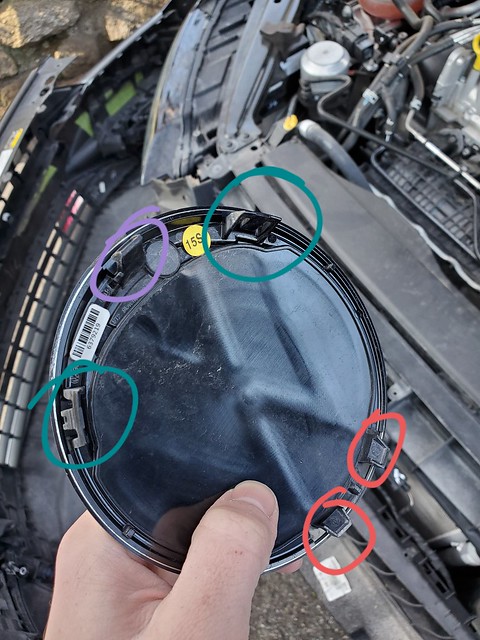 this is the clip to the Rline emergency braking sensor, id assume it would be the same, just with more wires in it for the ACC equipped cars.. theres a clip tab on both sides that have to be pushed at the same time to disconnect the plug. 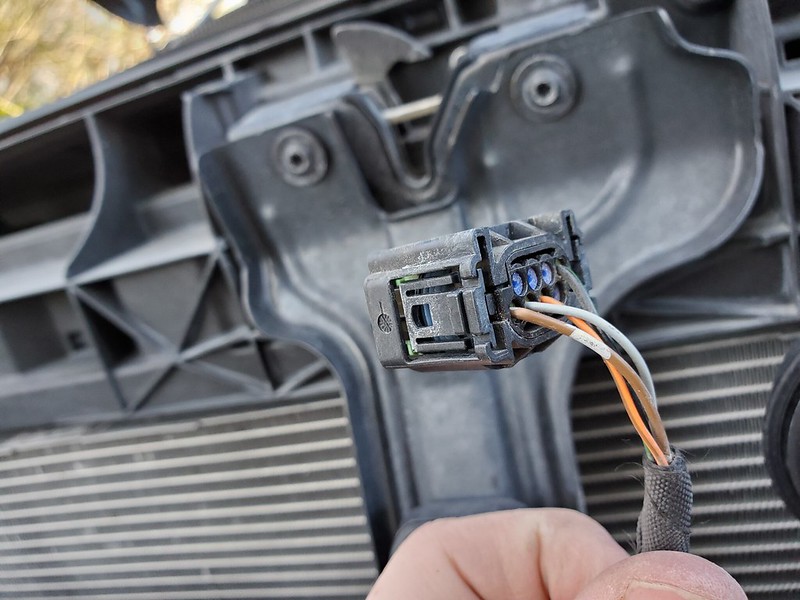 and that should be it.. pull the rest of the way off, just watch out for the bumper top corners on the headlights.
**if you have fog lights make sure you disconnect them!

Here are some more pictures of behind the bumper.

To remove the grill take out the 4 screws at the top and pull. really pull. the red circles are everywhere its clipped in. 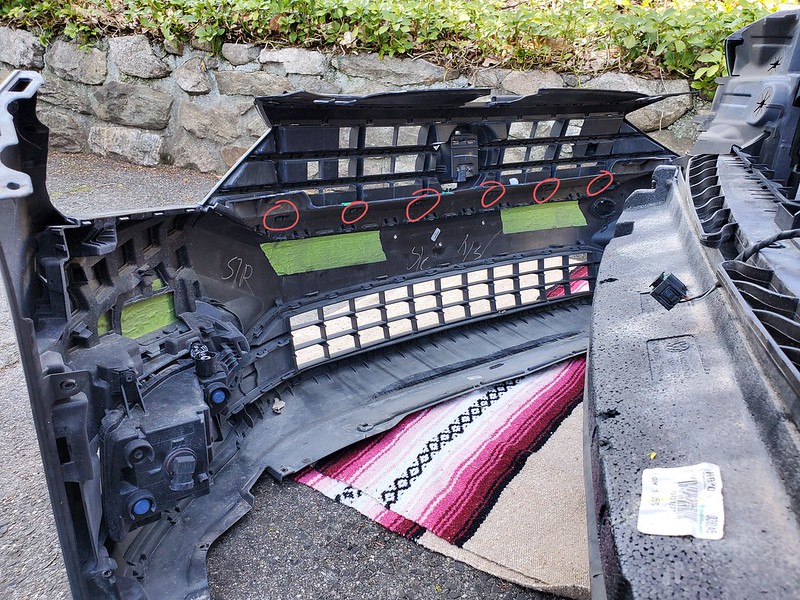 And here are some extra behind the bumper pictures. 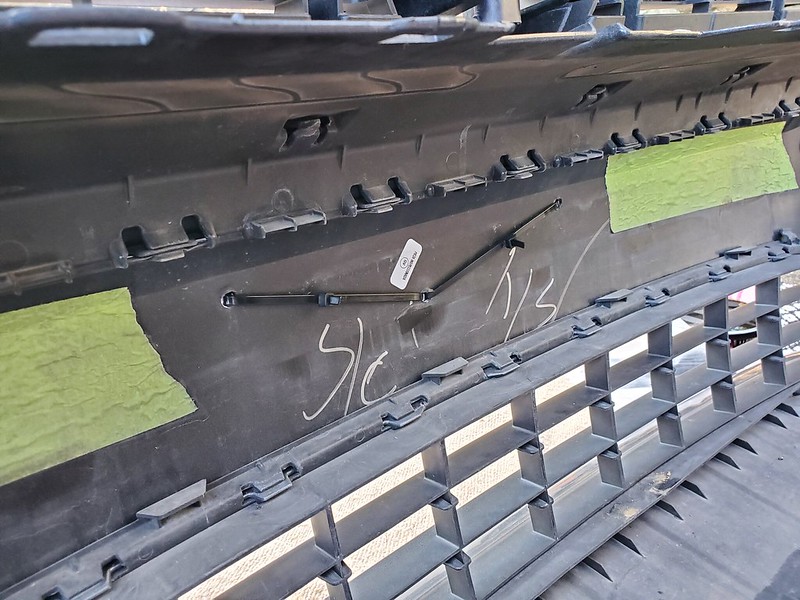 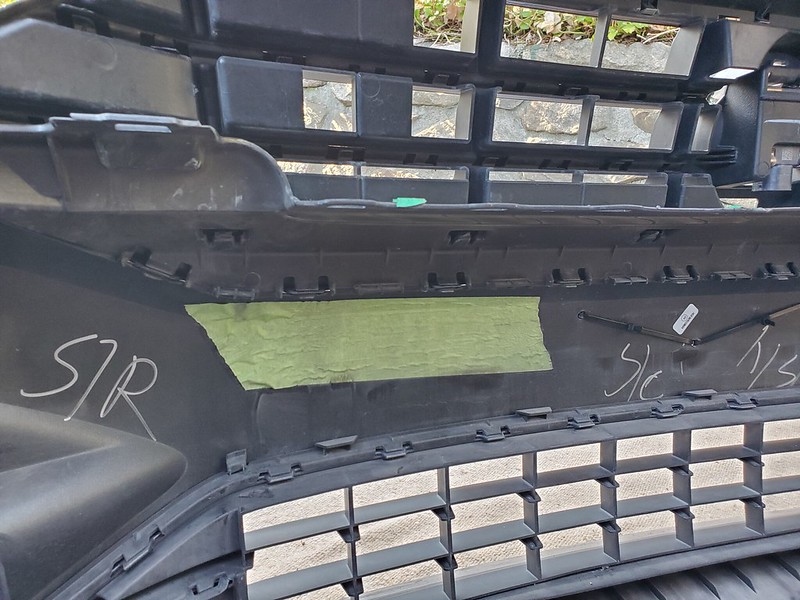 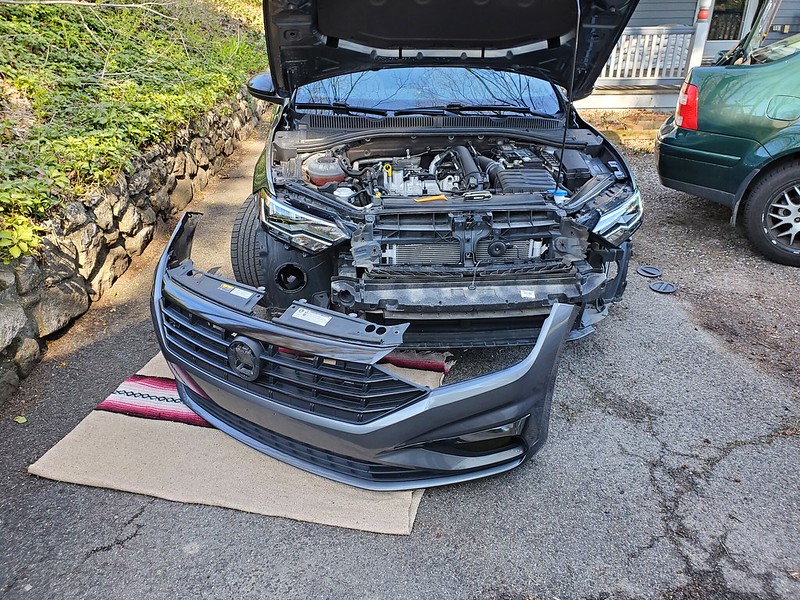 Ok, I hoped this helps someone else, because i would have liked to see it. but overall its pretty easy to do and didnt take long, re-installation is just backwards of removal.
Dont forget to reconnect the ACC/ EB sensor, and the fog lights.

I took my bumper off partly out of curiosity to see how to do it, an to zip tie a euro plate bracket to the dealer drilled holes for the USA plate bracket.

Impressive. Thanks for sharing .

Sent from my iPhone using Tapatalk

Thanks! I appreciate the effort to document this process, which — as I learned from replacing the horn — is neither obvious nor easy.

You may have erred, however, in saying:

The «grill» is the chrome-colored upper that is fastened to the «bumper,» which is the body-colored piece below. My experience in removal (to change the horn) was that the grill can only be removed after the bumper has been removed from the vehicle. If you want to separate the grill from the bumper, you must first remove the bumper from the vehicle.